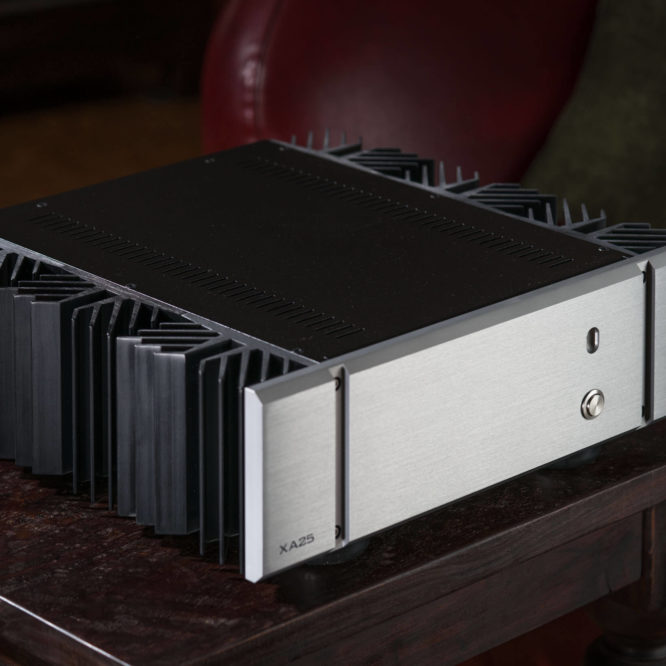 Every once in a while, a product comes along which re-defines our understanding of what an amplifier is actually capable of. The Pass Labs XA 25 is one such product.

Designed and built at Pass HQ in Auburn California this understated gem delivers performance way above any reasonable expectation.

The XA 25 is actually the “baby” of the Pass family of amplifiers. However please put to the side any notions that this device is in any way “entry level”. The XA 25 is capable of competing sonically with any other amplifier.

Weighing in at just under 22 kg and relatively compact (43.18 cm wide x 43.81 cm deep x 15.24 cm tall) the XA 25 can provide a great solution when space is limited and ultimate transparency is required.

The XA 25 is a 2-channel stereo amplifier which is capable of delivering 2 x 25 watts of power into an 8 ohm load and 50 watts per channel into a 4 ohm load. When evaluating the power capabilities of Pass Labs amplifiers it is very important to understand that the given power ratings are very conservative, and in practice the amplifiers are capable of much more. I will elaborate on this topic later.

Like all the other Pass amplifiers the XA 25 is a solid-state device, utilising a pair of FET transistors per channel. The amplifier topology is simple push-pull running in pure Class A. This design does bear some resemblance to the much sought after Nelson Pass First watt amplifier designs where the designer has freedom and liberty to experiment with different design topologies which appear in short production runs.

First impressions of the XA 25 are that it is a really well built and solid device which gives the feeling of a fuss free component that truly will last a lifetime. In the flesh it actually looks better than a lot of the pictures of the unit. The silver faceplate on the front looks very smart with a slight blue shade running through the finish.

The units heatsinks on each side give the device a distinctive look but also perform a very important passive cooling function when the unit is operated.

The rear panel contains a power switch, a pair of single ended RCA inputs and a pair of Furutech binding posts for the loudspeaker outputs. The device should be powered On via the rear switch but also has a power standby switch on the front panel.

The XA 25 takes around 1 hour to reach optimal operational temperature and its Class A operation means that the amplification devices are always fully switched On, which means that the amplifier runs warm. It is necessary to leave space around the unit for adequate ventilation, with around 10 cm of clear space required above the device.

Class A solid state amplifiers use more mains electrical power than Class A/B or Class D designs, but they are more efficient and don’t run as warm as valve amplifiers. Whether the design is solid-state or valve based it really is hard to beat Class A operation when it comes to sonic performance.

Listening to the Pass Labs XA 25:

There are many positive reviews of the XA 25 on various websites. The nature of subjective reviews means that impressions need to be considered in context of the rest of the system including the listening environment. There are so many variables involved that readers are by no means guaranteed to have the same experience when auditioning a component in their own system. However when we observe numerous reviews which are all very positive across a wide range of systems and the reviewers have all come to similar conclusions then this information becomes more meaningful.

Below is a list of Pass Labs XA 25 reviews:

The Pass Labs XA25 Class A Stereo Amplifier – “The Little Engine That Could” (positive-feedback.com)

The Audiophiliac finds bliss with a 25-watt amplifier – CNET

For anyone interested I would strongly recommend a home audition of this amplifier. The XA 25 will drive most loudspeakers however for those with large listening rooms and inefficient loudspeakers perhaps the Pass XA 30.8 or the high output voltage X 250.8 may be required.

Given all that, hopefully the notes written below will serve as some form of guidance.

My listening tests were conducted in a dedicated listening room which has been acoustically treated so that the listening environment has minimal impact on the musical presentation.

The playback system was as follows:

The first thing to check with any component evaluation is whether it adds any noise to the system when no music is playing. With the XA 25 in circuit the system was completely silent even when listening in very close proximity to the loudspeaker drive units.

The first thing I noticed about the XA 25 on music playback was its sheer transparency. My comment at the time was “it’s the most transparent component I have ever heard”. A number of amplifiers have been through my reference system and I was starting to believe that any solid-state amplifier would leave a slight imprint on the presentation thereby ruining the illusion of the musical instruments “being in the room”. However this notion was soon put to bed by the performance of the XA 25. Voices both male and female had an immediacy and naturalness which is the kind of quality that I usually associate with single ended Class A valve amplifiers.

This is a fantastic track as the recorded voices have all been captured very well and on a really good system can sound breath-taking. The bass vocal part goes extremely low and each voice has its own unique position in the soundstage. This is one of the real strengths of the XA 25, it projects an extremely believable soundstage, more believable even than my reference valve amplifier. Space between parts is real and overall width and depth and height of soundstage is very good, particularly for a solid-state amplifier.

This track features my favourite instrument of them all the Uilleann pipes. I grew up in Ireland and as I became a live sound engineer I had the pleasure of working with a few artists who used these wonderful instruments. They really are a musical instrument which can convey real emotion and are notoriously challenging to mic up. However on this Moving Hearts recording the capture of the Uilleann pipes is excellent and it is a real test of a reproduction system to replay this. In the past I have found that solid-state amplifiers have struggled to accurately reproduce a complex sound source such as the Uilleann pipes. My preference has always been valve amplification for this most difficult task. However the Pass Labs XA 25 has rewritten the rule book in this regard. One of the major design goals of the XA 25 was to remove signal degeneration. After been left with Uilleann pipes seemingly in the room between the loudspeakers I can assuredly say that the design goal has been accomplished.

The XA 25 is an amplifier with 20dB of gain, which is lower than most of the other Pass Labs amplifiers. Most of my listening was with the VTL 5.5 series 2 signature preamplifier driving the XA 25. The VTL 5.5 adds 11dB of gain as well as valve preamp character and dimensionality.  In some systems this additional gain from the preamp may be necessary when driving the XA 25. This combination of a high quality valve preamplifier in front of the XA 25 works very well.

Interestingly I also got very good results when driving the XA 25 directly from a DAC with variable output. In particular the Sonnet audio Morpheus DAC combined very well with the XA 25, with the DAC’s well designed output stage allowing the XA 25 to show how it is completely devoid of any artefacts. This set up impressed me so much that I am very keen to hear the XA 25 with a high quality and transparent solid-state preamplifier.

Another interesting aspect of the performance of the XA 25 is its excellent transient response. Although some of the bigger amplifiers with higher output voltages produce a fuller weightier presentation the XA 25 produces tight punchy bass and impressive dynamics.

So there you have it. One of the greatest designers of our generation Nelson Pass continues to bring extremely well engineered designs which pound for pound offer the highest levels of performance.

If you are interested hearing the Pass Labs XA 25 please get in touch using the contact details at the bottom of this page.